Teaching Your Kids To Be Self-Sufficient

How many times have you heard this lately? If your child is reaching that fun age of 2-5 years old, it’s probably all the time.

This is such a critical time in your child’s life as they are starting to learn what it is like to be independent and self-sufficient. While you still have a while before they leave the house and face the problems of adulthood, this is where the building blocks of independence and problem solving are laid.

For parents, this can be a frustrating process, but while there are certainly going to be a lot of messes and 20-minute shoe-tying sessions, it’s an important step to take with your child towards their development.

Here are some tips to help both you and your toddler achieve the independence they are looking for!

The sooner you let them be independent, the less pain you will be in later

As a parent, your initial reaction is going to be to resist. Up until now, you have been doing everything for your child, so why would you stop now? Not only that, but you don’t have the time to sit there as your little one tries to dress themself in clothes that don’t match just for you to change them out of them. However, the sooner you give your child the space to start doing things independently, the better it will be for you in the long run. Now, that’s not to say you need to force the issue. Your child will be sure to let you know when they are ready to start figuring something out on their own. But as soon as you start seeing your child seek that independence, let them have it and see how well they do. You’ll thank yourself later!

Let them play, even if it doesn’t make sense

As adults, we sometimes take things a little too literally. If something is a car, it’s a car. Or a block might just be a block. While this helps us in our adult lives, it doesn’t make for very fun play for our kids. Independent play lets kids create whatever world that they want to create without the limits that we put on them with our logic. This allows them to flex their imagination muscles and develop their creativity so they can better express themselves and find who they are as a person. Don’t worry, you can still have fun playing with your kids, but giving them space to play on their own from time to time will do them a lot of good and, who knows, they might be able to teach you a thing or two about having fun!

Fair warning… they’re going to do things wrong the first time. You will end up with food on the floor and toothpaste all over the counter, but these mistakes are how children learn best. Let them try things for the first time on their own (with a watchful eye of course), and talk to them after about some way to make it better. It might take 5, 10, or 100 times before your child can really do something on their own, but letting them learn from their own mistakes is far more effective than just telling them. In order to do this, make sure you allow yourself some extra time. Know that it might take an extra 10 minutes before bed for your child to brush their teeth, for example, and plan accordingly. That helps take the stress off of you and makes the experience much more enjoyable for everyone.

While your first instinct is going to always be to help your child with every little problem that comes their way, sometimes it’s better to see what they are capable of on their own. Problem-solving skills are one of the first things that a child needs to work on in order for them to achieve true independence. Without those skills, they won’t know what to do when adversity, no matter how small, comes their way. Next time you see your child trying to get a toy out of a box, for example, allow them space to try and work on the problem. At first, only give them a minute or two, but over time you can allow more space and let problems become more advanced (advanced to a 3-year-old anyway). This will go a long way to not having your little one come to you right away for every single little thing. They will learn that they are smart enough to do things on their own!

For us as parents, it is hard to let go. We want to love and protect our children and try to make life as easy for them as possible. This is what makes the independence stage so difficult for many. We don’t want to see our children struggle with anything and if we don’t help them right away, we feel like we are failing them in some way.

But really, this is the opposite of the truth. By letting your child start to be a little independent, learn new things and make mistakes, you are helping them develop skills and confidence that they will carry with them as they get older!

PrevPreviousHow To Baby-Proof Your Home
NextTips for Packing a Lunch with Healthy Options to Daycare!Next 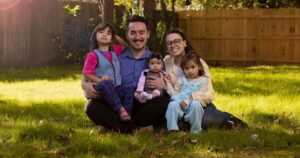 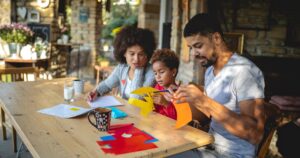